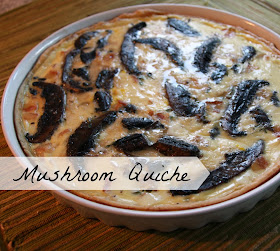 Quiche is one of those quintessential French dishes that sounds intimidating, but in reality is so simaple to make.

This recipe is for mushroom quiche - portabella mushrooms happened to be in abundance at the farmers market!  It's basically a twist on a more traditional Quiche Lorraine.


The only time-consuming step is making the crust, but a pre-made crust makes this a nearly effortless dinner. 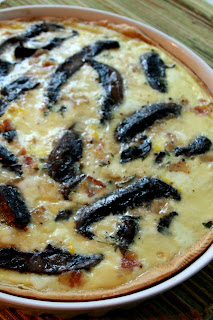 Start by laying the pie crust onto a lightly greased tart pan.

Prick the bottom of the crust with a fork.  This helps let the air out from underneath and keep the end result nice and flat.

I like to place the crust in the oven while its preheating, which helps give it a head start on cooking and keeps the texture crispier.  If you do this, keep an eye on it to make sure it doesn't start inflating - or follow the traditional French method of weighing down the crust with dried beans while it browns.

Meanwhile, for the quiche's contents:

Cut the bacon into 1/4 inch strips and cook in a frying pan until crispy. 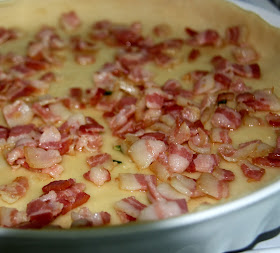 Utilizing some of the bacon grease that remains in the pan, saute the mushrooms.  Season with fresh thyme, salt, and pepper. 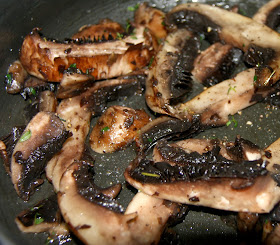 Crack open the eggs and whisk together with the cream.  Season with salt and pepper.

When the contents are ready:

Remove the crust from oven, and place the cooked bacon onto it. 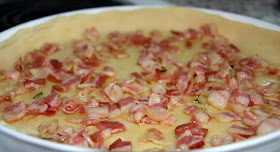 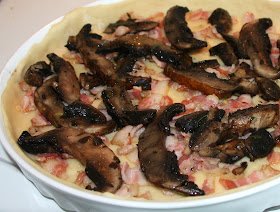 Carefully pour the egg mixture on top of the mushrooms and bacon, and place the quiche in the oven.  Cook for 25 minutes or until the egg has set and is lightly golden. 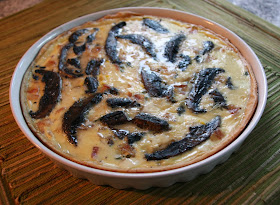